About
SCI Leadership
Applied Physics Graduate Program
Contact Us
Halas named a fellow of the Royal Society of Chemistry
July 16, 2019

Naomi Halas, the Stanley C. Moore Professor of Electrical and Computer Engineering and founding director of the Laboratory for Nanophotonics at Rice, has been named a fellow of the Royal Society of Chemistry (RSC).

To be eligible for RSC fellowship, a nominee must have made “a substantial contribution to the improvement of natural knowledge, including mathematics, engineering science and medical science.”
In February, the RSC honored Halas with the 2019 Spiers Memorial Award during its Faraday Discussion meeting in London, recognizing her “pioneering research at the intersection of optics and nanoscience and the demonstration of optical property manipulation by nanoparticle geometry.”
As a pioneer in the development of light-activated nanoparticles, Halas is the first Rice faculty member to be elected to both the National Academy of Sciences and the National Academy of Engineering for research done at Rice. Her discoveries have diverse applications in cancer treatment, optoelectronics, photocatalysis, chemical sensing, solar-powered distillation and steam production, and off-grid water treatment.
Halas has joint appointments at Rice in the departments of chemistry, bioengineering, physics and astronomy, and materials science and nanoengineering, and is director of the Smalley-Curl Institute.
ACS selects Naomi Halas to represent Americas at ChinaNano
May 29, 2019
Rice U. pioneer wins 2019 ACS Nano Lectureship Award for the Americas
Rice University nanoscientist Naomi Halas has been chosen by the American Chemical Society to represent the Americas as the winner of a coveted 2019 ACS Nano Lectureship Award.
The awards, established in 2012, honor the contributions of scientists whose work has significantly impacted the fields of nanoscience and nanotechnology. Only three are awarded each year, with one awardee each from the Americas, Europe/Middle East/Africa and Asia/Pacific.
Halas will present her award lecture at ChinaNano, the eighth International Conference on Nanoscience and Technology, which will be held in Beijing Aug. 17-19.

Graphene quantum dots drawn from common coal may be the basis for an effective antioxidant for people who suffer traumatic brain injuries, strokes or heart attacks. Their ability to quench oxidative stress after such injuries is the subject of a study by scientists at Rice University, the Texas A&M Health Science Center and the McGovern Medical School at The University of Texas Health Science Center at Houston (UTHealth). 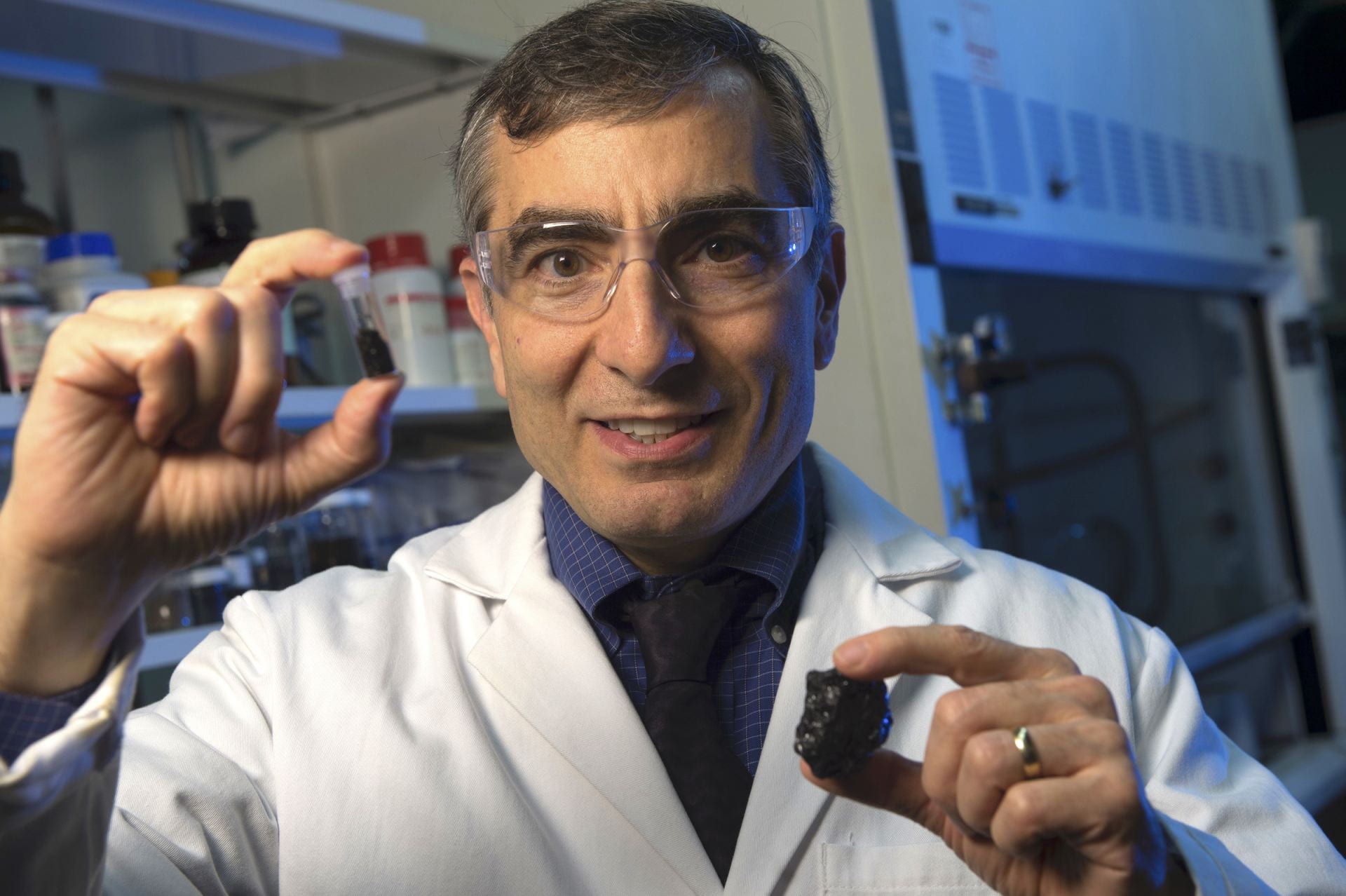 Rice University chemist James Tour holds coal and a vial of coal-derived graphene quantum dots. The dots have been modified for use as an effective antioxidant. Photo by Jeff Fitlow

Boris Yakobson, a materials physicist at Rice’s Brown School of Engineering, and materials scientist Mark Hersamof Northwestern led a team that not only discovered how to see the nanoscale structures of borophene lattices but also built theoretical models that helped characterize the crystalline forms. 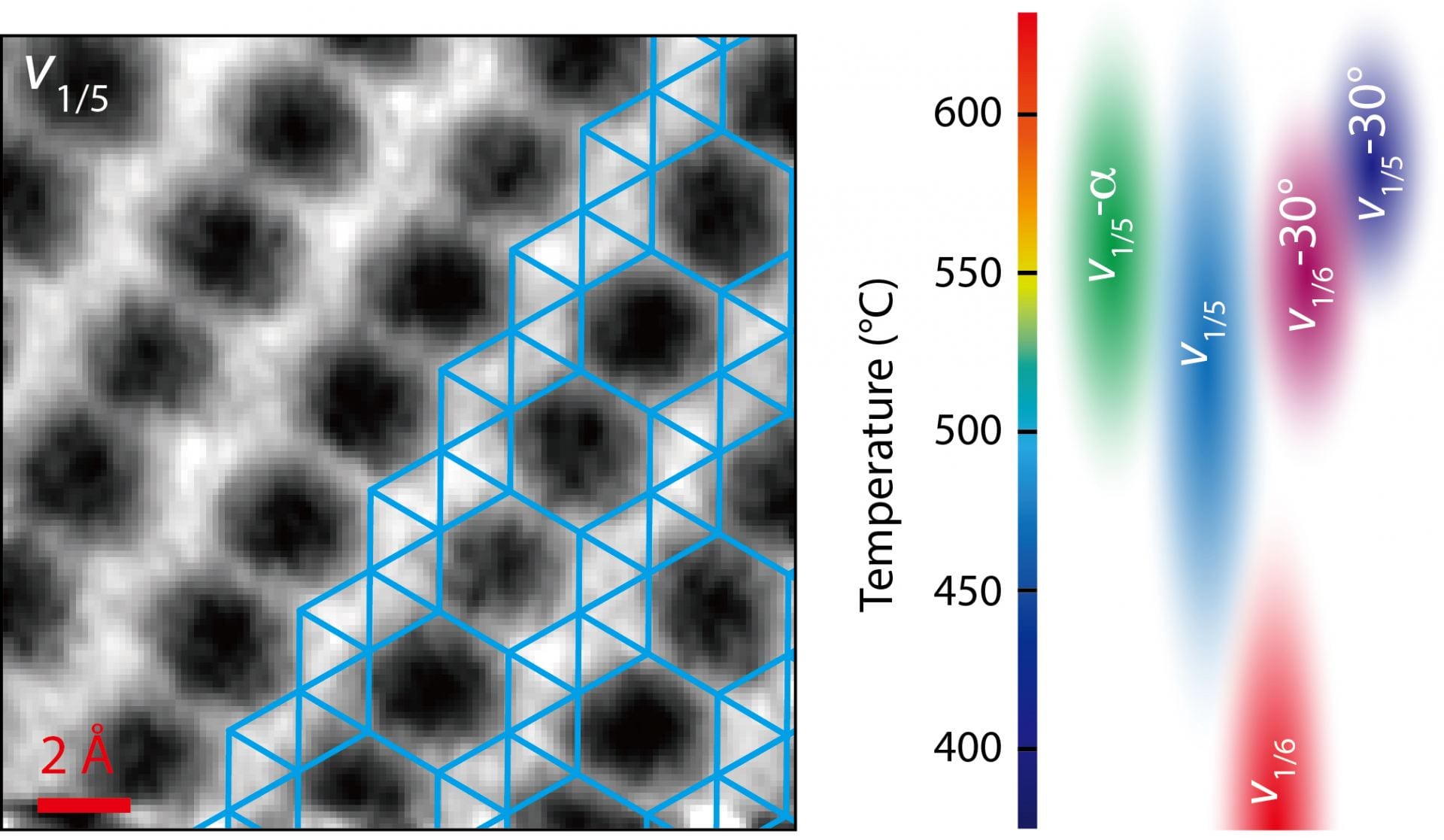 The Rice lab of Angel Martí published a paper in the American Chemical Society journal ACS Omega outlining what happens when PTFE stir bars are used to functionalize nanotubes through Billups-Birch reduction, a long-used reaction developed in part by Rice Professor Emeritus of Chemistry Edward Billups that frees electrons to bind with other atoms.

A pristine stir bar made of ferromagnetic metal with a PTFE, or Teflon, coating. Photo by Brandon Martin

The discovery by scientists from Rice University, Argonne National Laboratory and Northwestern University is a step toward practical applications like wearable or transparent electronics, plasmonic sensors or energy storage for the two-dimensional material with excellent conductivity.
Teams led by Boris Yakobson at Rice, Nathan Guisinger at Argonne and Mark Hersam at Northwestern both formed the theory for and then demonstrated their novel method to grow borophene – the atom-thick form of boron – on a gold surface.

In a study in the American Chemical Society journal ACS Sustainable Chemistry and Engineering, Rice University researchers Michael Wong, Chelsea Clark and colleagues showed that a highly porous, Swiss cheese-like nanomaterial called a metal-organic framework (MOF) was faster at soaking up PFOS from polluted water, and that it could hold more PFOS, when additional nanometer-sized holes (“defects”) were built into the MOF. 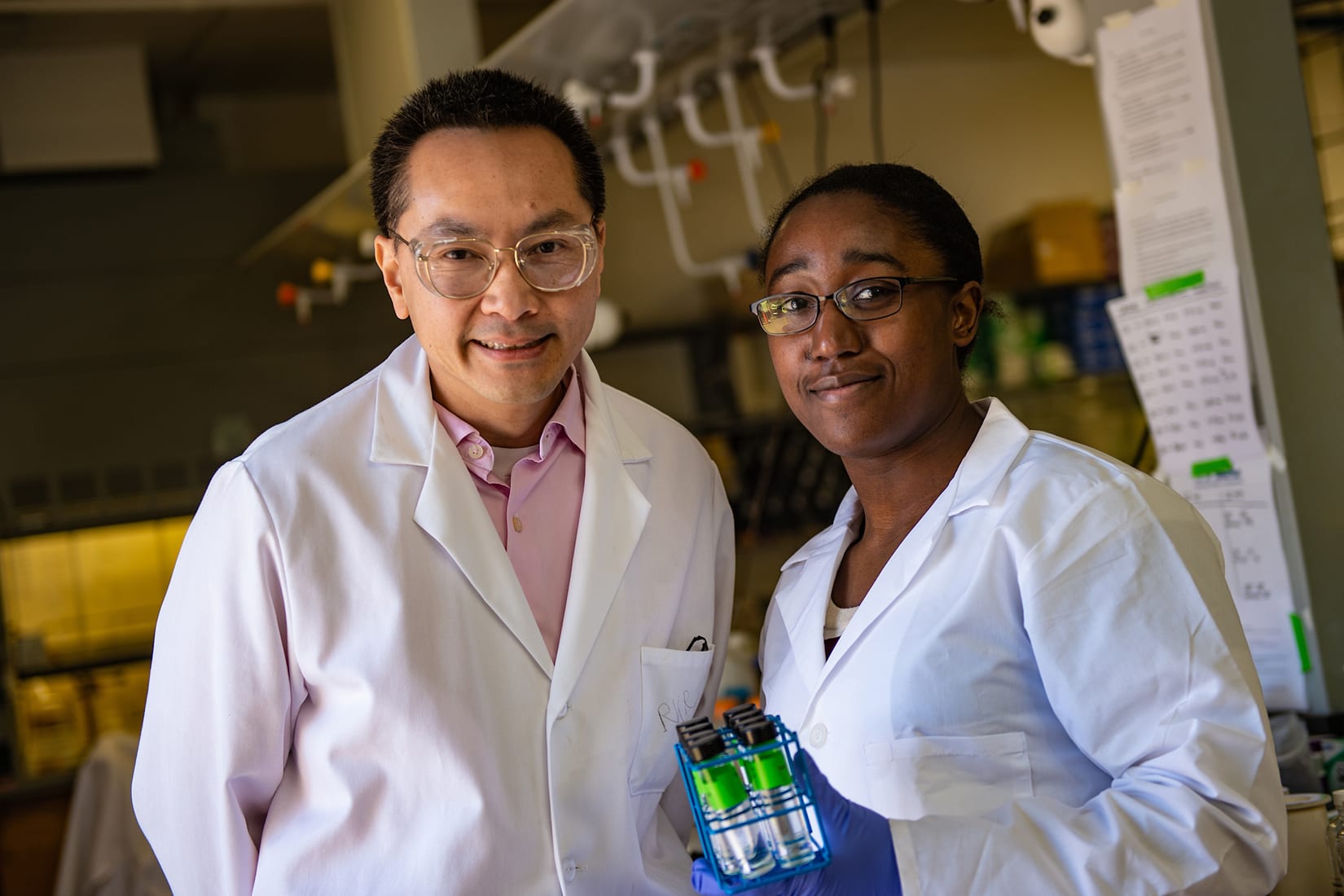 Rice University theory shows how monocrystals of hexagonal boron nitride come together
Very small steps make a big difference to researchers who want to create large wafers of two-dimensional material. Rice materials theorist Boris Yakobson and researcher Ksenia Bets led the construction of simulations that show atom-sized steps on a growth surface, or substrate, have the remarkable ability to keep monolayer crystal islands in alignment as they grow. 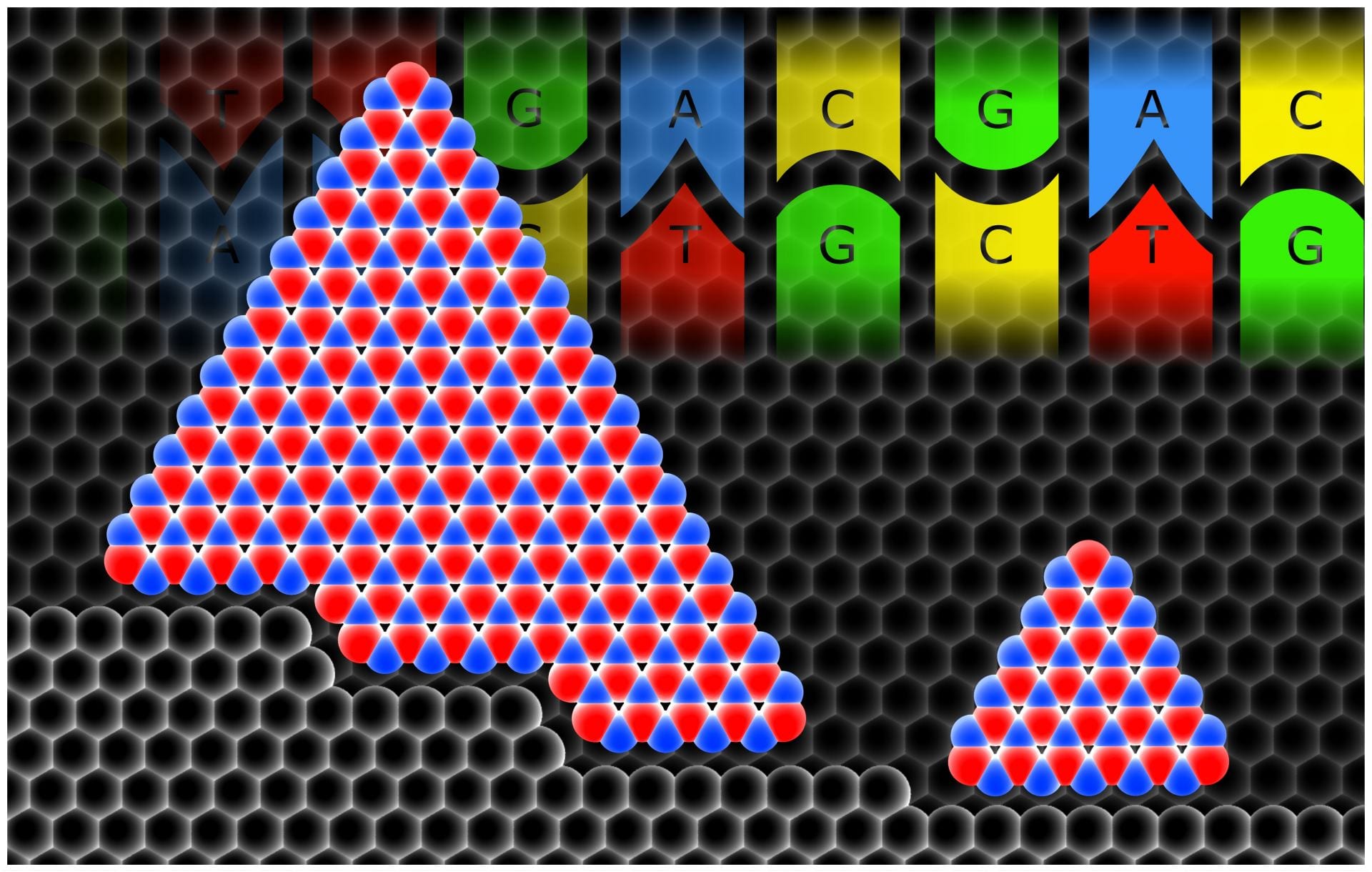 Gold nanowires grown in the Rice University lab of chemist Eugene Zubarev promise to provide tunable plasmonic properties for optical and electronic applications. The wires can be controllably grown from nanorods, or reduced. Courtesy of the Zubarev Research Group

How cold can it get? Physicists don’t actually know, but Kaden Hazzard aims to find out.
Hazzard, an assistant professor of physics and astronomy at Rice, will pursue that question with backing from the National Science Foundation, which has named him the recipient of a prestigious CAREER Award, given to the nation’s most promising young faculty. 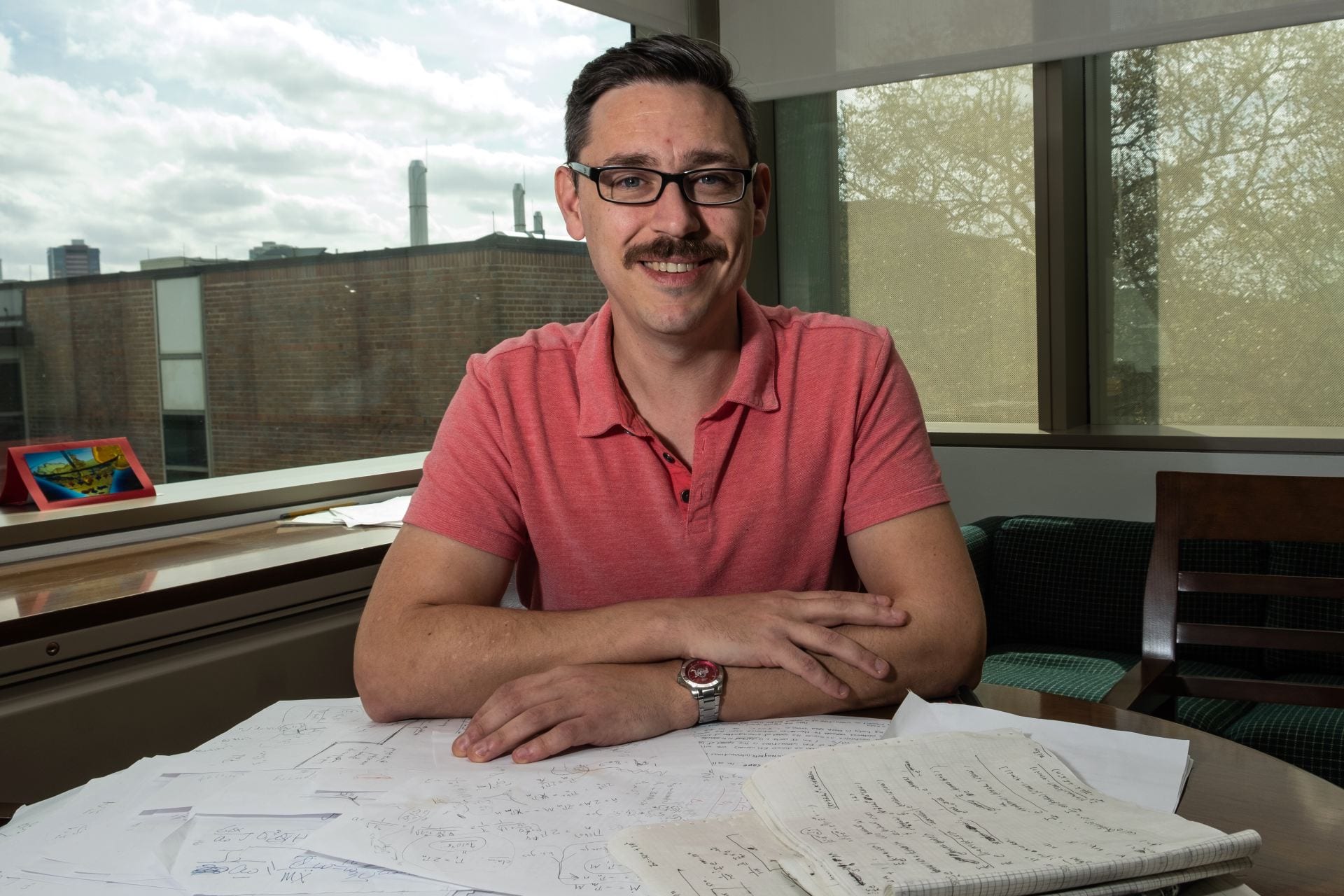